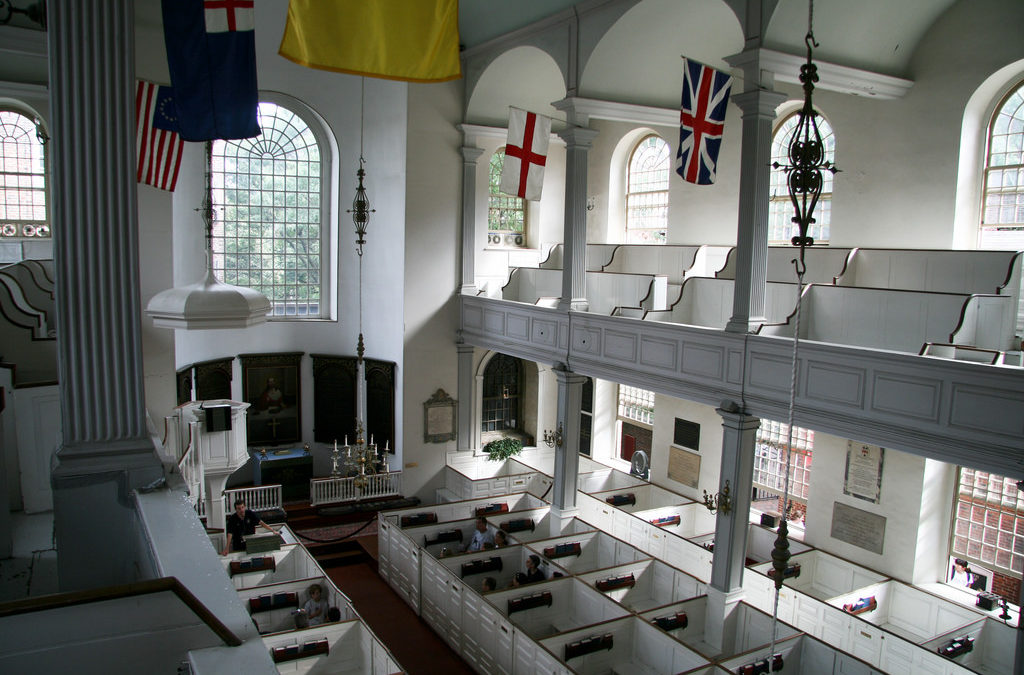 The Start of a Revolution

Paul Revere is one of history's more notable figures when it comes to the American Revolution. To be sure, he was a true Son of Liberty and did his part to bring about American Independence. We know him as the hero in Henry Wadsworth Longfellow's poem, Paul Revere's Ride, in which he mounts his horse and gallops from Boston to Lexington to warn the Minutemen of the advancing British regulars. Revere waited across the river in Charlestown, along with as many as thirty other riders who kept watch for three nights, ensuring that multiple sets of eyes were focused on the steeple of the Old North Church at all times. Finally, on the night of April 18, 1775, the signal was given. Two lanterns were hung that alerted the Patriot riders of the British advance across the Charles River.

Longfellow’s poem is more important than one might think in preserving the Old North Church from eventual decay and demolition. Until the poem was written, Paul Revere was a relatively unknown Patriot actor, and the church even less so. Longfellow was an ardent abolitionist in the years leading up to the Civil War, and his intent was to create an American hero with whom Northerners could identify. The poem eventually took root in American culture and countless grade school children have memorized it over the generations. The fondness with Longfellow’s poem in turn preserved the Old North Church as a cultural landmark and an enduring presence in Boston and in American history.

The Old North Church is located in Boston's North End, one of Boston's oldest neighborhoods, and is one of the 16 stops on Boston's Freedom Trail. Visitors can walk through the church sanctuary and read the many poster displays mounted in the pew boxes describing the history of the church and the events of April 18, 1775. One side of the church is dedicated to the actual historical accounts of the church and colonial Boston, while the other side is dedicated to Longfellow's poem and how it either mirrors history or perhaps takes a few artistic liberties in the story telling. Staff are available to answer your questions as you make your way through the church. 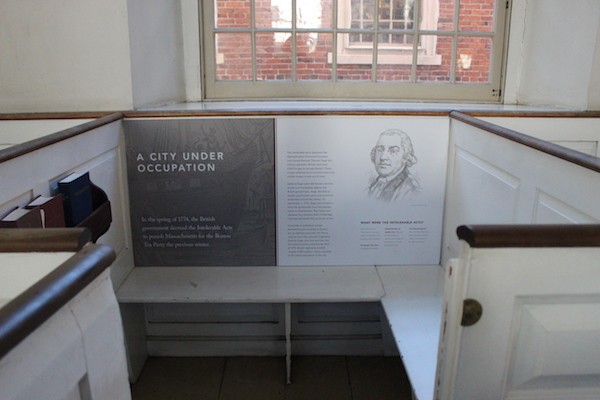 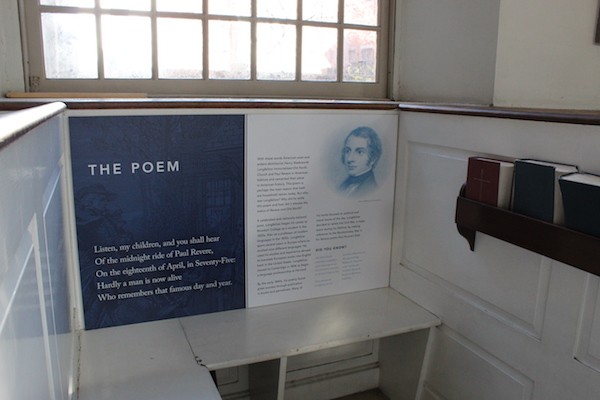 Everything is Better With Chocolate

A visit to Old North also includes Captain Jackson's Historic Chocolate Shop, located in the Clough House next door. Watch a short demonstration of how colonists made this delicious luxury item in the 18th century and sample a chocolate drink as it was made in the 18th century. An interesting fact is that due to the technology limitations of the time, solid chocolate was very dense to the point of being inedible. The only way to consume chocolate was to grate and then dissolve it in hot water, creating a rather bitter chocolate drink. But don't worry...even the "historic" chocolate available at Captain Jackson's has some added sugar to satisfy the modern palate. During your visit, actors in period dress staff the shop and are able to answer your questions about how chocolate was made, and its significance colonial American culture.

After learning about and sampling some historic chocolate, head next door to Patriot's Corner for more living history. You may see Professor Henry Wadsworth Longfellow at his desk, writing letters or poetry. Feel free to ask him questions about his most famous work and how he thought it might inspire his fellow Americans on the brink of another war 85 years after Revere took his now famous ride.

Old North is a worthwhile stop at whatever time of day you happen to be strolling through the North End. However, if you want a fuller experience and learn more about the church, then a guided tour is recommended. Tours are given primarily during the spring-autumn months on a regular schedule. Winter tours are available, but times are erratic due to lower visitor count. If you really want to have the guided experience, then call ahead @ (617) 858-8231 to ensure availability.

The Old North Church continues to function as a working Episcopal church. Services are offered on Sundays year round. 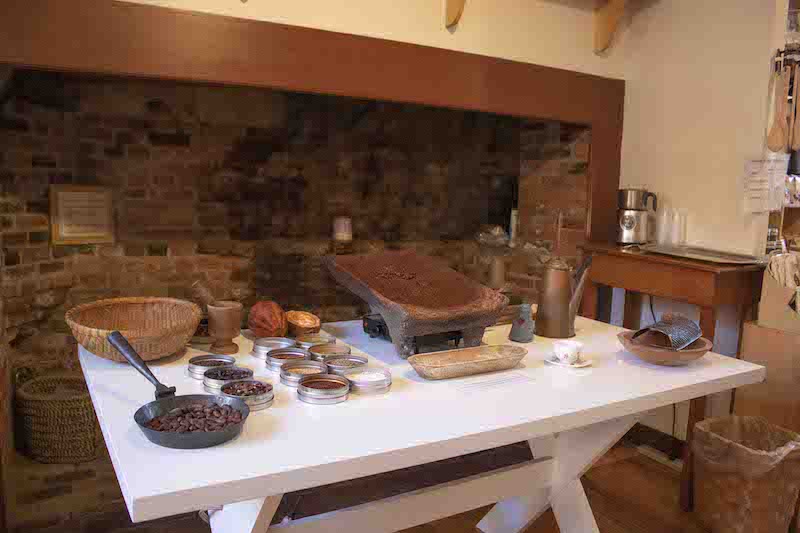 Note the grater at the right corner of the table. Chocolate was hard and brick-like, and needed to be ground and mixed with hot water in the 18th century. Chocolate bars and candies came later. 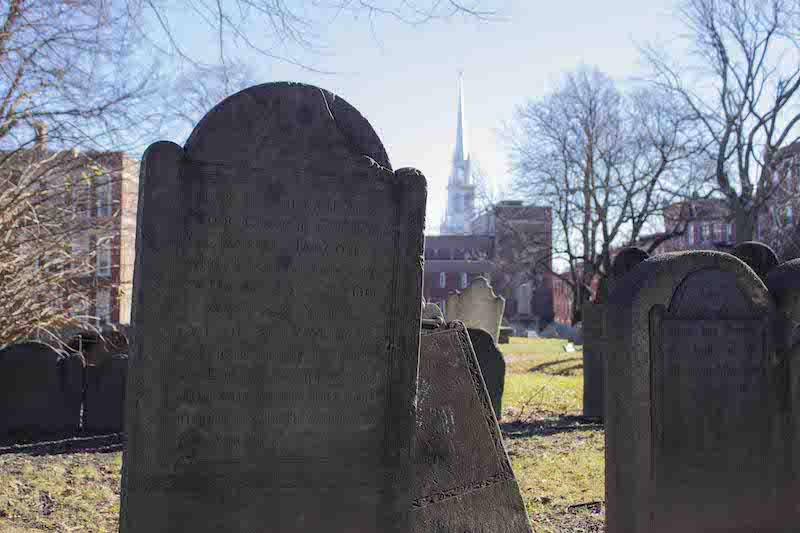 The steeple of Old North in the background. This gravesite of Patriot Daniel Malcolm has pock marks from British musket balls. The British used this site as an artillery emplacement during the city's occupation in the years leading up to the Revolution.

The British hated Malcolm and he knew it. He requested that he be buried 10 feet deep to prevent the British from digging up his remains.