Many travelers to Cape Cod, no matter in which town they choose to stay, will decide to take a day trip to Provincetown, located at the tip of the Cape. There are 15 towns on Cape Cod, and Provincetown is different from the rest in almost every regard. Perhaps most well known for its LGBTQ+ culture, this patch of sand also offers some great outdoor activity and natural beauty that cannot be found elsewhere.

Cape Cod National Seashore encompasses much of the outdoor landscape around Provincetown. One of its recreation areas, Province Lands, is home to a number of small cottages nestled amongst the sand dunes where visitors can take an approximately one-mile hike from the trailhead, past the cottages to one of the most pristine and isolated beaches on Cape Cod. It is undoubtedly the best dune trail on the Cape with a landscape that is otherworldly. You will find deep bowls made entirely of sand, wild cranberry bogs, and a desert-like atmosphere right up until you crest the final dune and meet up with the open Atlantic.

Hikers can easily navigate the trail despite the lack of trail markers. Just follow the footprints.

Although the hike is relatively short, about one mile each way, you will want to be sure to take along a few items for safety as well as enjoyment. During the height of summer, the heat reflecting off of the sand can be extreme and there is very little shade along the trail network. At a minimum, you will want to bring:

Water: One quart for each person during the summer months

Beach towels or blanket: You will want to spend some time on the beach once you arrive. A large, light blanket is ideal to protect against sand fleas and blowing sand.

Bug Spray: The beach flies are no joke and will chase you off the beach in a hurry if you forget repellant

Shoes: This sounds like common sense, but as you begin your hike you will notice lots of shoes scattered amongst the dunes. These are from other folks that have opted to go barefoot. While it is possible to walk without some kind of footwear, it is not recommended. The sand can get hot and there can also be some muddy portions of trail.

The trailhead for the Dune Shack Trail is located on Route 6 northbound, as you are heading into Provincetown. There is no parking lot. You may park along the road and no permit or fee is required. However, this is quite a popular trail during the summer months, so plan to arrive early in order to secure a parking spot.

There is a Cumberland Farms 2.5 miles north of the parking area, just in case you forgot to bring ample water or bug spray or to use the restroom prior to beginning your hike.

Once on the dunes, there are no actual trails or trail markers to guide you. You can generally find your way to the beach pretty easily, though, by walking in a northward direction toward the dune shacks. Walking on loose sand is slow, so allow 45-60 minutes to complete the trail in one direction.

Along the way, you will encounter a number of wild cranberry bogs where the natural aquifer rises to near-surface level. If you are hiking in late summer or fall, you may be able to see some wild berries. In case you are wondering, wild cranberries on their own are very bitter. Don’t expect anything like the sugar-infused dried cranberries that can be purchased at the grocery store.

Stand Up Paddle on Cape Cod

Enjoy one of Cape Cod’s most popular eco-tours with PEACE LOVE SUP. All tours are custom designed based on experience level, comfort with being on the water, and local weather conditions. With the most launch sites of any provider, we can be sure to provide you with a highlight of your Cape Cod vacation

History of the Provincetown Dune Shacks

The history of the Provincetown Dune Shacks dates back to the 19th century, before the construction of the Cape Cod Canal. During this time, ships traveling from New York to Boston or Halifax would have to negotiate the treacherous waters of outer Cape Cod that were peppered with constantly shifting shoals and sandbars from Chatham to Provincetown. Over time, Cape Cod had amassed over 3,000 shipwrecks and was notorious for its reputation as an ocean “graveyard”.

The dune shacks were initially built, in part with wreckage gathered from the beach, to house members of the US Lifesaving Service along the sparsely populated coastline. Their mission was to assist crew members who washed ashore after a wreck, providing emergency shelter and food until they could be returned home. After the completion of the Cape Cod Canal, ships were able to bypass the hazardous waters and the number of shipwrecks dropped off dramatically, making the lifesaving stations obsolete.

In the 1920’s, many of the dune shacks were purchased and rebuilt by painters and writers who flocked to the artist’s colony developing in Provincetown. Over the years, many well known creatives have spent time at the shacks developing their work including writers Jack Kerouac, e.e. cummings, Norman Mailer, and painter Jackson Pollock.

Since the creation of the Cape Cod National Seashore in 1961, most of the real estate along the coast as been purchased by the federal government, including 18 of the 19 existing dune shacks. They are still available for rent in the summertime to artists that apply for residencies from one to several weeks in duration.

Dune shacks offer a pretty spartan living experience. The intent is to provide the artist with a distraction-free environment so that work can get done. To this end, shacks have no running water or electricity, except some lighting generated from solar-powered batteries. A small gas refrigerator is usually provided as well as a wood stove. Walking to the outhouse in the middle of the night may provide particular inspiration.

Have you done this hike or maybe even stayed in one of the dune shacks for a time? Drop a comment and let us know how it went.

Whenever I travel, one of my favorite rituals is to find a restaurant or bar that serves the local brew on tap. If I...

What To Do on Martha’s Vineyard

Whether you are staying in the island for a week or just visiting for the day during a Cape Cod vacation, Martha’s... 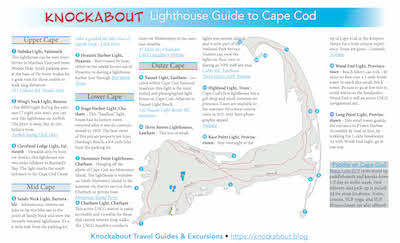