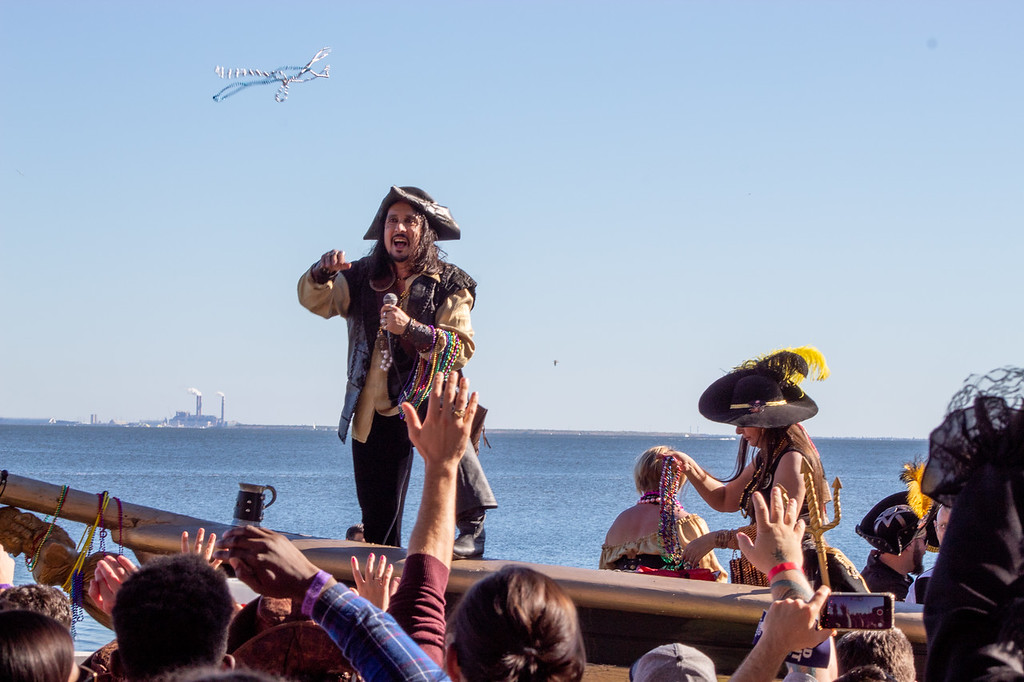 Tampa is steeped in pirate lore. Some of it is fact and much is the stuff of legend. It’s true that Florida was home to many pirates that continually menaced merchant vessels and sacked small villages in the Caribbean islands. One of the area’s most famous Buccaneers was José Gaspar, who terrorized the gulf coast around the turn of the 19th century and whose mythology lives on today in the form of pirate-themed sports teams, retail stores, and of course, the annual Gasparilla Pirate Festival.

A Season for Piracy 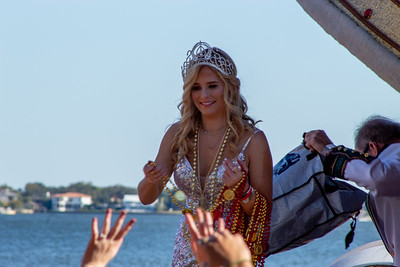 In the Mardi Gras tradition, collecting parade beads is a favorite event at Gasparilla’s Parade of Pirates

Most visitors to Tampa will associate the Gasparilla Festival with the single-day Parade of Pirates that is held on the last Saturday in January. However, the festivities actually cover a period of about six weeks and include a children’s parade, the Sant’ Yago Illuminated Knight Parade through Tampa’s historic Ybor City district, a film festival, road race, and an arts festival. All of these events are well attended, but this article will cover only the season’s signature event, the Parade of Pirates.

The story begins a few days prior to the parade, when the members of Ye Mystic Krewe of Gasparilla arrive in Tampa, kidnap the mayor, and demand that the city surrender to the pirates. Of course, the mayor refuses and the krewe announces that they will return the following weekend to take the city by force. On the morning of the parade, the pirate ship José Gasparilla sails (pulled by tugboats) through the bay to the Tampa Convention Center along with a flotilla of private boats, cannons ablaze, and takes the city by fire. Following the capture of Tampa, the Krewe holds a celebratory parade, which is what you are attending.

The parade is held over a five-mile stretch of scenic Bayshore Boulevard that runs along Hillsborough Bay and features over 90 krewes — independent groups in the Mardi Gras tradition that pull a parade float along the route. Each year, approximately 400,000 people line the street to cheer on the pirating krewes, making it one of the largest parades in the United States.

With so many people amassing along the boulevard, parking is an issue. Ridesharing services are available and recommended as there is very little parking near the parade route. If you must bring your own car, plan on arriving early, prior to 12:00 pm. Search for public buildings with large parking lots within one mile of Bayshore Boulevard.

Gasparilla is an adult event that allows drinking. The parade route is a designated wet-zone with open containers allowed. There are several venues to purchase alcohol or feel free to bring your own. Coolers perched on top of Radio Flyer wagons are a common sight. However, if you plan to bring your own drinks, at least visit one of the beer tents to have your ID checked and get a wrist band, signaling that you are of legal drinking age.

There are also quite a few food options available along Bayshore Boulevard. These are the typical trucks or trailers that serve carnival-style items like grilled chicken, fries, sausage and the like. As the parade route reaches downtown near the convention center, there are established restaurants from which to choose. One recommendation is Four Green Fields, an Irish pub with two locations near the parade route. The flagship location on West Platt Street is just a block from the parade route, and another location is located at Curtis Hixon Waterfront Park, located at the parade’s finish line. The potato-leek soup is a best seller and is delicious, but get there early as it sells out quickly.

José Gasparilla was purpose-built for the annual pirate festival. It is shown here arriving at Ballast Point Park at 8:45 am on the morning of the Parade of Pirates. 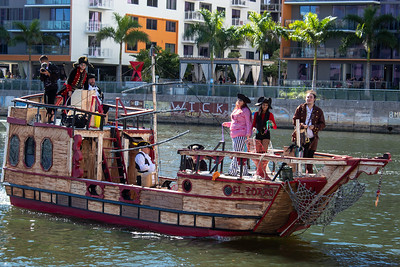 One of the many private boats that are decorated for the festival. They “invade” the Hillsborough River about an hour prior to the parade start. 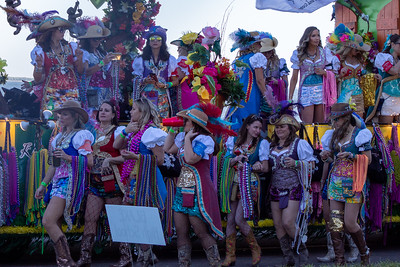 The classy ladies from the Krewe of Queen Anne’s Revenge, pictured here at the parade start on Bayshore Boulevard. The “Annie’s,” like many Gasparilla krewes, support several charities with their fundraising efforts. 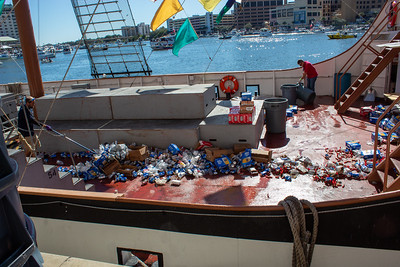 Pirates Will Be Pirates

The deck of the José Gasparilla after invading the city of Tampa.

This drummer traveled from New Bedford, Massachusetts, to play the buckets.

Perhaps you want to enjoy the Gasparilla festivities, but the idea of getting up close and personal with 400,000 intoxicated strangers is a bit unappealing. You may want to pony up a few dollars and take advantage of the reserved seating options. Not only do you get a reserved seat, but you have access to an area of the parade route with far fewer people, allowing you to spread out a bit when you are not seated. You will be able to get closer to the action and have unobstructed views of the parade. For a price of around $62, it’s money well spent. Tickets can be purchased on the official website at https://gasparillatreasures.com/

While the Parade of Pirates is the main event of the day, Gasparilla also has a few other activities happening in the downtown area. Two stages are set up along Tampa’s Riverwalk, featuring live bands and DJ music. The José Gasparilla pirate ship arrives at 1:00 pm for the “invasion” at the Tampa Convention Center, along with its flotilla of private boats. So, visiting the nearby Riverwalk between 1:00 – 2:00 pm will allow you to grab strings of beads as they are thrown from the flotilla. Afterward, you can make your way back to Bayshore Boulevard, or view the parade from its endpoint downtown. 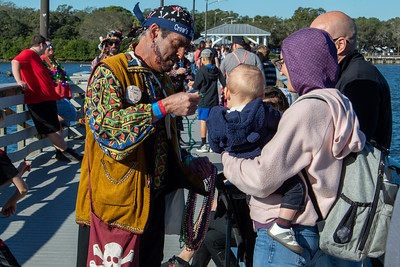 A pirate from Ye Mystic Krewe of Gasparilla hands out parade beads to children at Ballast Point Park.

Although the city has cracked down on most of the lewdness during the parade, the reality is that the Parade of Pirates is not geared for younger children. It is probably best to attend the children’s parade the week prior if you have kids in tow. However, there are a couple of strategic locations where you can offer your children a great experience.

With so many people attending the festival, you can imagine that hotels, especially those located within walking distance to the events, fill up well in advance. Hotels by the Tampa Airport will require a taxi but are significantly cheaper. 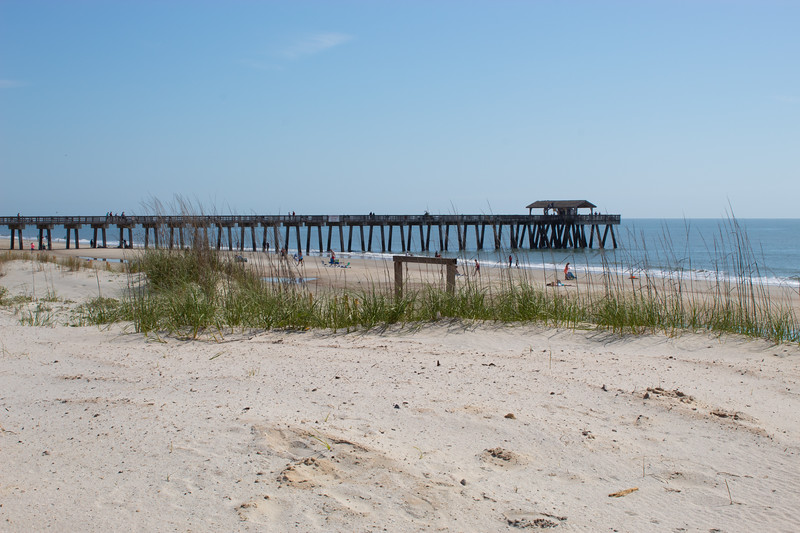 What To Do in Savannah, Georgia

Savannah, Georgia, is steeped in history and charm, and you will have no lack of things to do while spending a long...